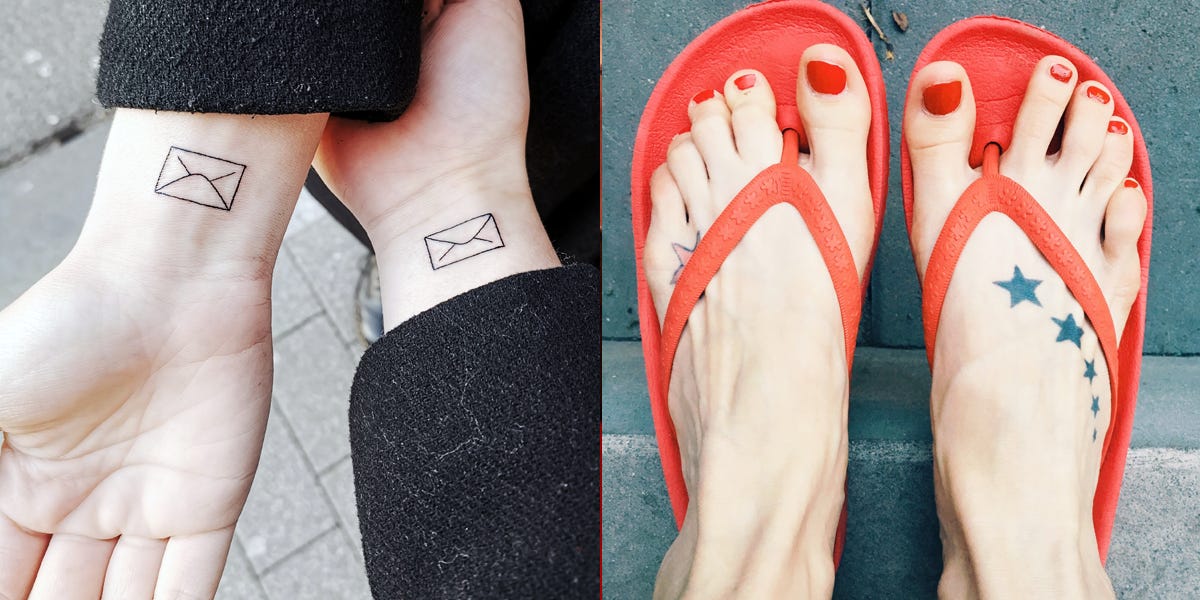 Insider spoke with tattoo artists to learn more about common mistakes they see people make when getting small tattoos.

Jesse Smith, celebrity tattoo artist, shop owner, and codirector of the Richmond Tattoo, Art & Music Festival, told Insider “one of the biggest mistakes people make when getting small tattoos is getting them too small.”

Over time, ink tends to bleed, or expand, which can cause small tattoos to become blurry and lose detail.

“You can expect the lines to double, triple, and sometimes quadruple in width over time, so it’s best to keep that in mind when choosing a design,” Smith added.

Smith told Insider you should consider the placement of your small tattoo, as he’s seen people put them on large patches of skin and end up wanting to fill up their body with something bigger.

“Throughout my career, I’ve seen many people start with a super small tattoo, and then, later, they decide that they want something bigger. This typically leads to having to cover up the little tattoo and/or odd placement within the body part,” Smith said.

He recommends saving small tattoos for smaller surfaces such as the feet, ankles, and inside of wrists.

“With small tattoos on the wrist, sometimes people want it ‘facing them,’ which makes the tattoo look upside down. Say they are getting a word tattooed, and they want it placed facing them so when they look at their hand, it’s right side up,” Simms said.

“However, your arms are mostly down — relaxed, standing, in photos — therefore, the tattoo always looks upside down, and this is a huge bone of contention amongst tattooers,” she added.

“An issue with smaller tattoos is that the client often wants ‘everything but the kitchen sink,” Bean said, adding that, over time, all of those details “will bleed together.”

Tattoo artist Lorena Lorenzo of Indigo ArTattoos told Insider that even though getting a small tattoo can be fun and spontaneous, it’s essential to think about the placement.

“Finger tattoos, inner-lips tattoos, and work done on the hands and ears are very trendy these days, especially minimalistic ones that look very cute at first,” Lorenzo said. “But later, they will become a nightmare and hard to fix or retouch due to the area they are on.”

When in doubt, ask your tattoo artist about what you need to be aware of if you ink a certain spot on your body.

Gianna Caranfa, tattoo artist and owner of Bee Inked Parlor, warns against choosing yellow or white ink for small linework tattoos since “your skin is naturally darker than these pigments” in most cases.

“Since tattoos are in the second layer of skin, the first few days of a tattoo in this pigment will look bright and visible; however, once the first layer grows back over, it will be hidden by your skin tone,” she said.

Consider sticking with darker ink colors for the best results on small tattoos.

Brandon David, tattoo artist and founder of Tattoo Space, said it’s also important to keep your undertones in mind when choosing any design.

“Some people have tan skin with a yellow undertone or a red undertone. Some darker complexions have yellow or red undertones,” David told Insider. “Understanding this allows you to pick the right color for the tattoo to ensure it heals and settles long term at the desired color and ages well.”

David warned against using yellows and golds on tan skin with yellow undertones, as the skin will mute the tattoo colors and small tattoos, in particular, will become hardly noticeable and muddy.

Some assume that just any artist can do a small tattoo, but Caranfa told Insider that’s not always the case. Not researching your artist might lead to a poor-quality tattoo.

“Usually, when a tattoo artist can take you right away, there is a reason — whether they are still new/an apprentice or lack good work and are not busy,” Caranfa said.

Plus doing small tattoos requires a lot of expertise. Someone without proper experience might end up using too-thick lines or creating unsteady, scratchy linework.

“A client should always research and find an artist with clean linework who specializes in smaller, thinner tattoos,” Caranfa said.

It’s not uncommon to see a small tattoo paired with a lettered word or phrase. This can emit a cluttered look, especially for smaller tattoos.

“A lot of people want to get a tattoo that means something so they choose a picture that represents that. But then, sometimes, they also want to write it out. They want to say, in words, exactly what the image already represents,” David said.

According to David, some areas of skin are more prone to issues when it comes to the longevity of tattoos.

Places like the inner wrist, elbow, elbow ditch, knees, knee ditches, armpits, and ankles can be especially tricky to tattoo and “are prone to multiple issues when it comes to tattoos and longevity.”

David recommends working with a knowledgeable artist to understand if a special approach is needed to ensure the tattoo you’re getting heals and lasts.