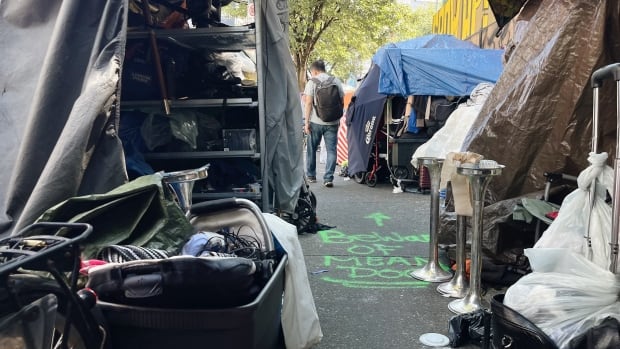 Vancouver’s fire department has ordered the immediate removal of tents and structures along East Hastings Street in the city’s Downtown Eastside due to “numerous urgent safety concerns.”

In a bulletin issued Monday afternoon, the City of Vancouver said the order, issued by fire chief Karen Fry, emphasizes the increased fire risk associated with the number of tents and structures currently set up along the road.

There have been several fires in the area in recent weeks, including one that destroyed a community church and another that reduced a Value Village store to rubble.

The dismantling of structures comes as Vancouver, and much of the province, remains under a heat warning. Temperatures in Vancouver are expected to reach up to 33 C inland.

The bulletin says there will be extra support for people living outdoors, including storage for belongings, more public washrooms and increasing access to misting stations, handwashing and water fountains.

Mayor Kennedy Stewart said he was informed late last week that Vancouver Fire Rescue Services was going to take action, and said he supported the move.

“The situation has become unsafe for the folks that are both in the buildings and also on the sidewalks,” he said.

“Although, I do know it is going to be difficult for those who are currently living along Hastings Street, because some of them will have to move.”

Stewart said despite the thousands of non-market housing units and modular homes built or purchased across Vancouver in recent years, “it is clear that demand for high quality, supportive housing still outstrips supply,” and called for further investment from higher levels of government.

The release from the city said that “since July 1, the situation … has grown significantly more unsafe,” and added that it was also on July 1 when the Vancouver Police Department stopped accompanying city staff during street cleanings.

When asked about the link, Stewart said he didn’t regret how the process had played out.

“It wasn’t a city decision. That was a police operations decision,” he said.

“We’re trying to coordinate as best as possible. I think that all of this changed today with the fire order — it will bring us closer together to try to coordinate even more because the situations has become so urgent.”