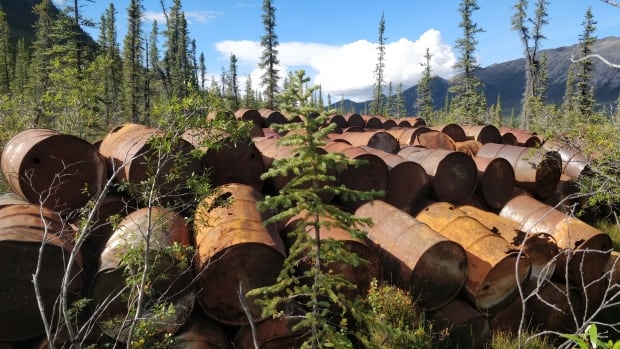 The federal government wrapped up its remediation of the Canol Trail — an abandoned, World War II-era road through the Mackenzie Mountains — in 2019, but a co-founder of a yearly hike along the route isn’t pleased with the amount of debris that remains there.

Norman Yak’eula is with the Canol Trail Youth Leadership Hike. He says the land is still spotted with old vehicles, empty barrels and other debris from the trail’s days as a military road and oil pipeline connecting the oilfield in Norman Wells, N.W.T., to the Alaska Highway in the Yukon.

Yak’eula acknowledged federal remediation efforts, but said he wants the Canadian government, and even the U.S. government, to continue the cleanup.

The Canol Trail was part of the Canadian Oil (CANOL) project, a joint U.S.-Canadian effort during the Second World War to ensure American forces stationed in the Pacific Ocean had access to a continuous supply of oil, according to a 2017 Canol Trail project engagement log from the federal government.

The project included the construction of a crude oil pipeline, maintenance camps, pump stations, telephone lines and a road — 372 kilometres of which ran between Norman Wells and the N.W.T.-Yukon border.

The project was abandoned in 1945, shortly after its completion. Eventually, Canada assumed responsibility for the Canol Trail’s cleanup.

Work related to the Canol Trail cleanup had been underway for more than a decade before the remediation began in earnest in 2018. That work involved environmental assessments, elder interviews and the formation of a working group.

The working group was described as a forum for Indigenous leaders and government officials to discuss details of the remediation project. Yak’eula was a member, representing the Fort Norman Métis Land Corporation.

CBC News reached out to all the local organizations on the working group, but none provided an interview before deadline.

In the summers of 2018 and 2019, remediation workers hit the trail. They gathered up and stockpiled debris and empty drums; removed asbestos, petroleum products and old batteries; and boarded up old buildings.

There was also a three-year federal program that cleaned up animal-ensnaring telephone wire from 314 kilometres of the trail.

Some items have ‘heritage value’

Ron Breadmore, an acting senior manager at Crown Indigenous Relations and Northern Affairs, said in an emailed statement that there were a number of reasons why the trail wasn’t cleared of all traces of the CANOL project.

He said some stuff — like material from collapsed buildings, empty drums and old bridges — poses a low risk to human health and the environment.

Other things, like old vehicles and pump houses, are not dangerous for humans, wildlife or the land, said Breadmore. They’re also relics of the trail’s “historical legacy,” and have “heritage value.”

Indeed, Northwest Territories Tourism, a not-for-profit destination marketing organization, promotes the trail as an “outdoor museum, memorializing the monumental efforts of the war.”

The federal government has spent about $12.3 million on remediation of the Canol Trail to date.

Breadmore said that CIRNAC couldn’t speculate on what it would cost, or entail, to clear the trail of all items left behind.

He said the department would like to hear from “concerned community members,” and would “engage with the working group, who developed the existing plan for the Canol Trail, before any costing or further decisions are made.”

Breadmore said that CIRNAC will keep monitoring the trail to make sure it remains safe for people and the environment.

He added that last summer, CIRNAC announced $25,000 for Dene Nation to help it document the Sahtu Dene’s role in the Second World War and in building the Canol pipeline.

But Yak’eula takes a different view.

He doesn’t mind some structures and vehicles along the trail — “That’s part of history,” he said — but he’s less sentimental when it comes to the barrels, piles of debris and other “junk.”

According to the 2017 Canol Trail engagement log, Yak’eula was present for a discussion on the plan to focus remediation efforts on the cleanup of hazardous materials. He was also part of a group that expressed concern about the plan not including the removal of barrels or debris from the site.

Now, Yak’eula suggests the U.S. government pitch in to help with the cleanup.

The United States Department of Defence did not provide a response to CBC’s request for information about any post-war involvement in cleaning up the Canol Trail.

Breadmore, with CIRNAC, said “the U.S. government’s responsibility for the Canol Trail ended when they sold the pipeline and assets to Imperial Oil in 1945.”

The N.W.T. portion of the Canol Trail lies within the Sahtu Land Claim Settlement Area. Yak’eula, who was formerly the chief negotiator for the Sahtu Tribal Council, signed the land claim agreement.

The agreement allows for the creation of a territorial park that covers the Canol Trail, but it doesn’t require one.

A proposed Doi T’oh Territorial Park and Canol Heritage Trail Management Plan was approved by the N.W.T. minister of Industry, Tourism and Investment in 2007.

The current status of the proposed park is unclear. The N.W.T. government did not respond to CBC’s requests for an update on the park before deadline.