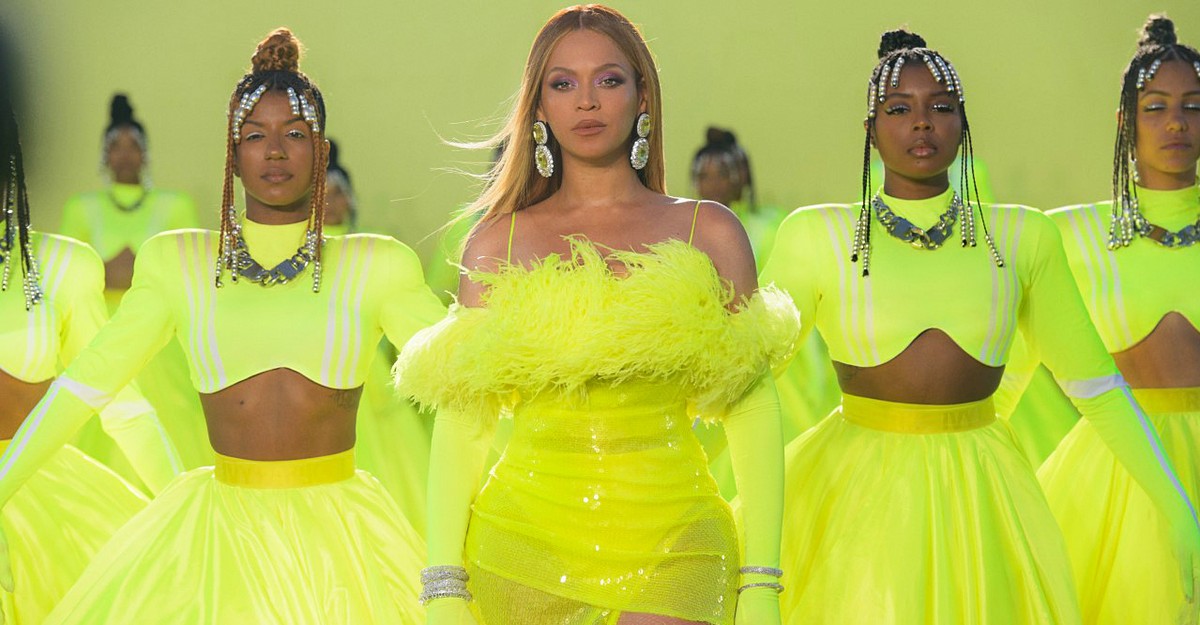 This is an edition of The Atlantic Daily, a newsletter that guides you through the biggest stories of the day, helps you discover new ideas, and recommends the best in culture. Sign up for it here.

Are you ready to “release the wiggle”? Beyoncé’s new album will soon test America’s appetite for dancing—and her ability to adapt to the times.

But first, here are three new stories from The Atlantic.

When Beyoncé’s seventh solo album, Renaissance, arrives on Friday, we will find out what pop’s most ingenious superstar has been cooking up for the past six years—and whether she still has the power to stop the world.

It was all the way back in April 2016 when Beyoncé unveiled her last solo album, Lemonade, with an HBO special. In addition to delivering musically eclectic anthems with intricate videos, Beyoncé also jolted audiences with gossip (the lyrics seemed to reveal infidelity on the part of her husband, Jay-Z) and a social message (poetry and images meditated upon the historical struggles of Black women in America). Mixing songwriting, cinema, memoir, politics, and marketing at a very high level of quality, she had once again proved pop’s capabilities as a total art form, or at least as a rich storytelling medium.

Beyoncé didn’t exactly disappear after that. A glorious Coachella performance, a lovey-dovey rap album made with her husband, and a deeply ambitious Lion King tie-in soundtrack/movie all arrived in the past few years. Beyoncé also spent that time building a leisurewear empire and raising three kids. Yet fans have been dreaming of another solo album because solo albums tend to be Beyoncé’s most important, lasting works. They’ve featured all-time classic singles such as “Single Ladies (Put a Ring on It)” and “Crazy in Love.” They’ve popularized innovations such as the surprise album, the visual album, and the phrase I woke up like this.

Yet 2016 was a long time ago—does Beyoncé still matter like she once did? TikTok and streaming have made celebrities more approachable, audiences more fractured, and popularity more fleeting than ever before. Beyoncé’s famously regal persona is arguably out of step with a zeitgeist in which artists are rewarded for taking selfie videos in their bathroom.

But the current absence of Beyoncé-like figures—exacting, elegant, unknowable—is precisely what makes her new album such an intriguing prospect. Besides, she knows how to craft art that both suits its moment and pushes it forward. For nearly two decades now, her albums have seemed less designed to dominate the radio than to dominate the cultural conversation.

This time out, she may also be aiming to get people to move their body. Judging from the clues she’s released thus far, the sound of Renaissance will channel the history of dance culture, drawing from discos, raves, and maybe even 1920s jazz joints. With ’90s house keyboards and upbeat exclamations from the New Orleans club fixture Big Freedia, the lead single, “Break My Soul,” has performed strongly on the Billboard Hot 100. The production credits for Renaissance’s unreleased songs include dance legends such as Donna Summer, Grace Jones, Nile Rodgers, and (here’s a curveball) Skrillex. Coming shortly after Drake’s album-length foray into house music, Renaissance may signal a cultural vibe shift: Long-trending trap and R&B beats could give way to fast, fun pulsation.

Yet surely the album won’t be just a hedonistic blast. Beyoncé’s music stands apart because of her weighty themes, her personality-packed vocals, and her knack for stylistic juxtaposition. “Break My Soul” mashes up rap, house, bounce, and more into a four-minute-plus epic about burnout, working, and resilience. By focusing on dance music, she’s putting a spotlight on one of the art forms that has helped Black people and other marginalized communities survive and thrive over generations. She’s also making a case for letting loose in tense times. “My intention was to create a safe place, a place without judgment” with this album, Beyoncé wrote on Instagram. “A place to be free of perfectionism and overthinking.” Who doesn’t need a place like that in 2022?

The Dirtbag Is Back

This summer, the “dirtbags” have taken over screens. You know them when you see them. A paragon of the form is Eddie Munson from Stranger Things: Repeating his senior year of high school, Eddie sells weed, leads the Dungeons and Dragons club, and strikes most of the townsfolk as a plausible Satanist. He is alternately goofy and intimidating, with a love of heavy metal and a mullet one imagines smells of stale beer. In FX/Hulu’s new series The Bear, the protagonist, Carmy, represents another version of the grubby archetype—a tattooed, greasily rakish kind of man who seems unstable yet wields a certain allure.

More From The Atlantic

Read. Elvia Wilk’s Death by Landscape argues that giving space to the weird can help us reconsider our relationship to nature.

Watch. Victoria’s Secret: Angels and Demons, Hulu’s new documentary, asks why we bought what the brand was selling.

Filling in on the Daily today was a nice break from working on another Beyoncé-related piece I’ll soon publish, about dance music’s history. Want some recommended music for this alleged summer of clubbing? To time travel back to some of the most liberated raves ever, check out this recently unearthed collection of tapes from decades of DJ sets on Fire Island and in New York City. If you’re in need of an adrenaline flood, turn on this explosive 2022 Pride mix from the futuristic producer Doss (and if you’re in need of something chiller, try her dreamy 2021 EP). Lastly: I won’t soon forget a party I was at last month where the DJ, Ash Lauryn, selected Casamena’s two-step remix of Beyoncé’s “Break My Soul,” drawing out a sense of melancholy that is submerged in the original.

Isabel Fattal contributed to this newsletter.