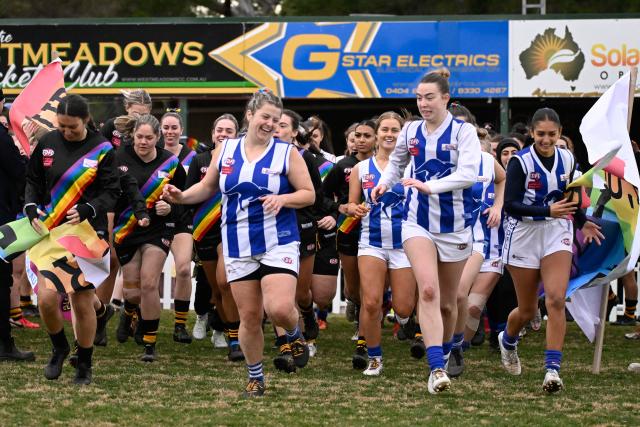 It was more than just about results for Westmadows’ women’s side on Saturday in the Essendon District Football League.

While their two women’s sides had important top four clashes, there was a bigger focus on the day about celebrating inclusion and making everyone feel safe.

The women’s sides held their first ever Pride Cup to celebrate LGBTI+ inclusion in sport.

Senior player Gemma Wright was one of the people involved in organising the day. She said they had tried to get the cup up last year, but hadn’t been able to due to COVID-19.

“We were surprised by the amount of people down there,” she said. “The car park was full and it’s never full for one of the women’s games.

“Our women’s captain Jacinta Scott is married to Nat [Scott, the Tigers division 2 coach] and she identifies at lesbian and we wanted to make this round special for her.

“A lot of players [in women’s sport] identify as lesbian and we wanted to have a round to show we are really inclusive.

“We want to support everybody.”

The Tigers wore a specially made jumper with rainbow sash. Both their opponents, Oak Park and Tullamarine, also got involved where they could.

“We ran through banners together and showed the unison,” Wright said. “We wanted everyone to feel welcome and safe.

“We had market stalls and a stride for pride 100 metre race at half time. There was also information and support there for people who might feel isolated and need that help and support.”

Wright said they were hoping this was the star of something bigger for not only the club, but the league.

“Our men were hoping to be involved in it, but couldn’t get it done this year,” she said.

“They were really supportive and if we can get in early enough next year, hopefully it will be a whole club thing.

“It’s important for us if we can get some support from the EDFL that maybe have a pride round, that is bigger and better.

“Hopefully we can get other clubs involved and make it a whole EDFL thing, not just a few clubs doing it.”