> Tornado warning lifted for Brockville, still in place in Gananoque Skip to content 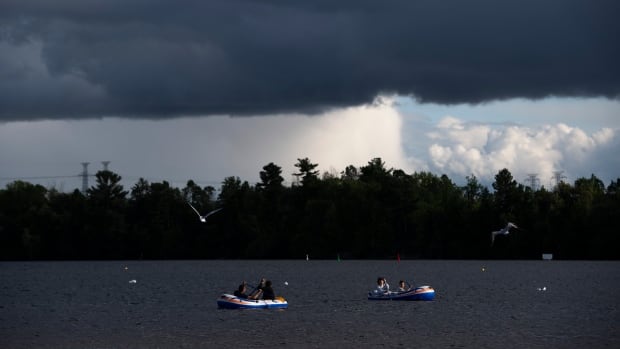 Environment Canada continues to track a line of severe thunderstorms across eastern Ontario that have caused serious damage Sunday evening and may have produced a tornado.

The most recent tornado warning was issued just before 10:30 p.m. for a swath of the region running from Brockville, Ont., to Gananoque, Ont.

It came less than one hour after a similar warning was lifted for the Frontenac Provincial Park area north of Kingston, Ont.

The storm is capable of generating 100 km/h winds, Environment Canada said in its latest warning, calling it a “dangerous and potentially life-threatening situation.”

Environment Canada advised people to take shelter indoors in a room on the lowest floor, away from outside walls or windows, as tornadoes cannot be seen at night and may strike without warning.

The warning was lifted for Brockville shortly after 11 p.m., but remains in place for Gananoque and nearby Mallorytown.

There have been reports of “significant” damage to homes and properties, along with trees down and power poles toppled, Cranton told CBC Ottawa Sunday night.

As of 10 p.m., there were no reports of injuries or fatalities, Cranton said.

Hydro One was reporting more than 32,000 customers across Ontario were without power as of 11 p.m. The utility said in a tweet its crews were working “as quickly and safely as possible” to restore power.