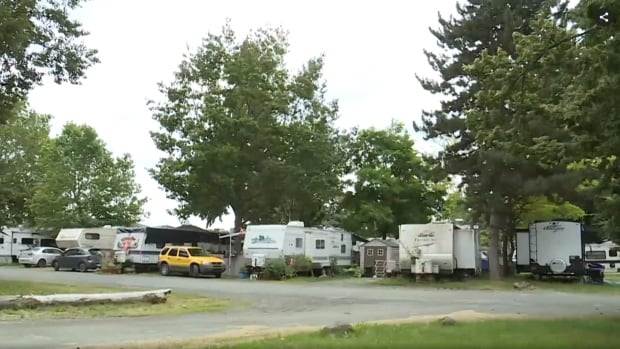 The small Vancouver Island community of Duncan is struggling to find housing solutions for people who live in RVs as some of them face tripling rent increases and restrictions on where to park.

While recreational vehicles are generally more affordable places to live, they are subject to city bylaws across the Cowichan Valley that don’t allow them to be parked on city streets, in backyards or in parking lots.

Living in an RV park offers some stability, but park owners don’t have to abide by provincially regulated rent increases.

Carolyn Lawson experienced that first hand when her monthly rent at Riverside RV & Camping went from $500 to $1,200.

“I have two incomes not even close to what I would need in order to survive and to stay here,” she said. “It’s just absolutely heartbreaking for me that I have to leave.”

The minister of the Duncan United Church says dozens of others are in similar situations.

“There are many people in our area, in the Cowichan Valley, who are living in RVs and vans and have no place to hook up or connect because the other RV parks have already done substantially what hers has done,” Keith Simmonds told Gregor Craigie host of CBC’s On The Island.

It’s a catch-22 for RV dwellers — they can’t afford to pay rent in RV parks and they’re not allowed to park their RVs anywhere else.

The bylaw prohibiting RV parking is complaint driven, according to the mayor of Duncan, which means bylaw officers aren’t regularly seeking people out to tell them to move on. But it does make RV dwelling an unstable housing option.

“If somebody sees somebody else living in an RV, they file a complaint and then, bylaw enforcement moves them on,” said Simmonds.

Duncan Mayor Michelle Staples says similar bylaws are standard practice in most municipalities because of safety concerns, sewage and the absence of hookups.

Simmonds recently proposed that Duncan city council could allow churches to host RVs in their parking lots and give users access to church facilities and hookups.

“They’ve asked their staff to go out and figure out what it is that the municipalities can do to respond to this appropriately,” he said.

For Staples, changes need to happen at the regional level. That’s why Duncan city council recently met with counterparts at the municipality of North Cowichan.

“We need to do this more broadly in our region because it’s not just impacting our city,” she said. “We need to have partnerships within that to address that.”

In the meantime, she’s watching as the town of Canmore, Alta., nears the end of a one-year seasonal pilot parking program. The Safe Park Program issued permits on a first-come first-served application basis to people living in their vehicles between June 1 and Sept. 30.

Listen to Keith Simmonds talk about why the city of Duncan needs a solution for people living in RVs:

On The Island11:18With daily rent set to triple, a group of RV dwellers in Duncan face an uncertain future. We will speak with a local church minister who is helping those struggling with this housing insecurity.

Gregor Craigie spoke with Keith Simmonds, Minister of the Duncan United Church, who is supporting RV dwellers in the Cowichan Valley.