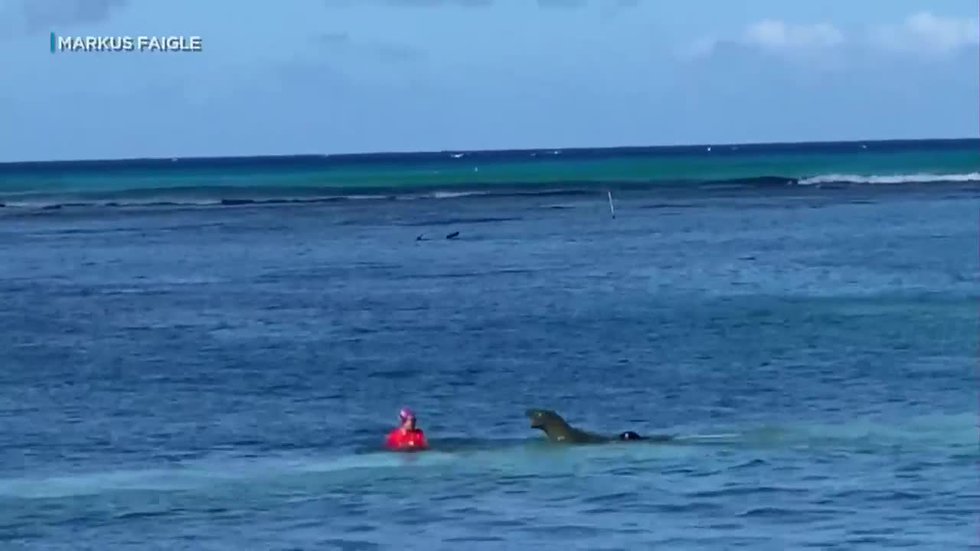 HONOLULU (HawaiiNewsNow) – The woman bit by a protective monk seal mother in Waikiki won’t be facing fines from the state after the terrifying encounter Sunday morning.

A federal fine from NOAA however could still be a possibility. It’s unclear at this time if they plan to issue the citation.

Officials with the Department of Land and Natural Resources said Monday the woman is a 60-year-old elementary school teacher from California. She and her husband, who have been in Hawaii for three weeks, were questioned by state officials to learn more about what happened.

Through their investigation, DLNR officials in a news release said the woman “did nothing to provoke the incident and was not even aware the seals were in the water prior to the incident.”

Instead, they said the woman was in the “wrong place at the wrong time” while swimming off Kaimana Beach around 8:30 a.m. Sunday, despite signs and barriers that have been up in the area for weeks.

The Hawaii Marine Animal Response team also told Hawaii News Now the woman was previously warned of the dangers of being in the area.

The couple told the DLNR that the seals were closer to the Natatorium when the woman, along with several other swimmers, hopped in the water.

Earlier in the morning, mother seal Rocky exhibited agitated behavior when she briefly lost sight of her pup before eventually being reunited.

Witnesses said the woman was doing laps in the water about 150 feet from the shore when the seals began swimming toward her.

The woman was reportedly unaware the seals were nearing her and appeared to be shocked at how close they actually were moments before the attack began.

“My wife had a swim cap on, and her head was in the water when both seals appeared. She could not hear 50 or so people on the beach screaming for swimmers to get out of the water. She then stands up and hears the people screaming and waving at her. She starts swimming away from the seals,” the woman’s husband told the DLNR.

“I’m thinking she’s going to die, by the time I get down to the beach. When I got there, three rescuers, including one in an outrigger canoe were bringing her to shore, while the seals were swimming toward them again,” her husband added.

The seals charged the swimmer multiple times, biting her and leaving lacerations on her face, back and arms, the DLNR said.

Several bystanders, including a canoe paddler, came to the woman’s rescue. They brought her to shore where EMS crews eventually took over and treated the woman for minor injuries.

The couple said they’ve acknowledged and abided by the warning signs in their previous visits to the beach. They stand by the account this was a mishap in the water, and they do respect nature and animals.

“Neither of us could sleep last night. Every time I closed my eyes, I was seeing the mother seal’s mouth,” the woman told the DLNR. “I’m a teacher and I care a lot about the environment and wildlife. I teach conservation to my students. I’ve collected discarded fishing hooks and brought them to shore and three years ago I saw a sea turtle entangled in fishing line and reported it.”

Her husband added, “There is no one to blame here. All my wife did was go swimming and she happened to be in the wrong place at the wrong time.”

The Executive Director of the Hawaiian Monk Seal Preservation Ohana, Dana Jones said everyone should be more cautious around Hawaiian monk seals.

“And for someone to think that they should go ahead and have a swim, just because they don’t see the mom and pup on the beach is very irresponsible,” said Jones. “Rocky was protecting her pup she did not attack this woman, this woman provoked it by being in her space.”

Jones added that monk seals can move very quickly and can swim up to 35 miles an hour.

“If you look a monk seal in the face and in the eyes, that’s a challenge just like it is with a dog,” Jones explained. “You turn away, you go away, you walk away, you get away, swim out, whatever you can do, do not swim towards the pupping zone, which is where Rocky was trying to take her baby.”