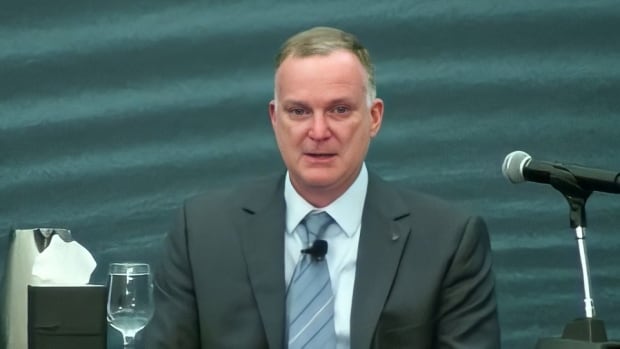 After two days of intense questioning of how RCMP decisions were made during the mass shooting of April 2020, Chief Supt. Darren Campbell ended his testimony at the public inquiry in tears, apologizing to the families of 22 victims who died.

As he broke down, Campbell said it was the first time he has cried in two and a half years.

“I apologize for failing,” he said. “I’m truly sorry that we failed you, and I promise that we’ll do better.”

Campbell testified Monday and Tuesday before the Mass Casualty Commission leading the public inquiry into the rampage on April 18-19, 2020, when a gunman shot and killed 22 people over 13 hours in several communities throughout the province. The victims included a pregnant woman and an RCMP officer.

At the time of the shootings Campbell was the support services officer, which is one of the highest-ranking RCMP positions in the province. He handled most of the public briefings after April 19, 2020, and was in charge of bringing in critical incident resources like incident commanders and the emergency response team.

Chief Commissioner Michael MacDonald had one question for Campbell — something he said he has been struggling to wrap his head around. He wanted to know why RCMP members didn’t find the bodies of five victims on Cobequid Court in Portapique, including the Tuck and Bond families, until the evening of April 19, 2020.

“Why was it that in your experience, and you’ve reviewed it all if you can help me understand, how it came to be that the priority for the threat seemed to have overwhelmed what was going on in Portapique?”

Campbell said he wasn’t on the ground that day and could only speak based on his experience of more than 30 years.

“My experience is based on one or two scenes, not 16 scenes,” he said. “In terms of the scope and enormity of the situation and the confusion that the perpetrator caused … to establish the fraction of awareness of the scope and magnitude would’ve taken some time.”

Campbell said he “wasn’t trying to make an excuse” but he does have some level of understanding of the pressure for members who were responding that day.

“I don’t know if anyone else from that investigative team had experienced anything like this — I doubt that they ever had,” he said.

“It’s clear to me that many feel their efforts of trying their best was not enough. I would’ve hoped to have seen that we would’ve identified those additional crime scenes much, much earlier.”

Campbell said there are many reasons to secure a crime scene as soon as possible. Besides informing families, he said it’s also important to preserve evidence.

During his testimony across Monday and Tuesday, Campbell agreed there were gaps that ideally should not have happened, which is one of the reasons he asked RCMP headquarters for an independent review into the force’s actions across April 18 and 19, 2020.

He wrote a formal letter asking for this review, but Campbell said he got the sense Ottawa was wondering whether a review would be duplicating efforts of the Mass Casualty Commission.

Rob Pineo, a lawyer with Patterson Law representing most families, suggested it would have been helpful to interview Portapique resident Kate MacDonald, who was shot at by the gunman but wasn’t injured — unlike her husband, Andrew, who was taken to hospital and survived.

Pineo said officers could have asked Kate MacDonald more about the possible back road out of Portapique, which is the way the commission suggested the gunman escaped before 11 p.m. AT on April 18, 2020.

He was also asked about why police did not comprehend the possibility that the gunman was driving an exact replica of a RCMP cruiser, despite witnesses describing it as having lights and stripes within the first hour of the massacre.

Campbell said what likely happened was human nature, and “bias” created through experience, since a replica car would be so unrealistic. In the future, he said it would be helpful for dispatchers, call takers and RCMP members to all share the exact quotes from witnesses when there is confusion, so details aren’t filtered through various interpretations like a game of telephone.

Also, once the mock cruiser was confirmed, Campbell said Tuesday he would have liked for the public to have been notified about it sooner.

The inquiry has heard that despite photos of the gunman and his vehicle going to the strategic communications team shortly after 8 a.m. on April 19, 2020, it wasn’t posted on Twitter until more than two hours later at 10:17 a.m