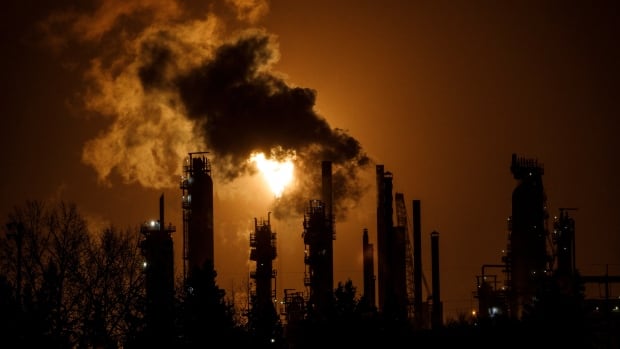 Canada should measure and report statistics on greenhouse gas emissions quarterly instead of annually to bring them in line with the way economic indicators are reported and as a way to give more weight to environmental health and wellness, says a prominent environmental economist.

“The concern that I have is that we’ve got an issue of global significance — and certainly national significance — called climate change,” said Robert Smith, principal at Midsummer Analytics in Ottawa and a senior associate with the International Institute for Sustainable Development.

“And we aren’t providing people with statistics that are of equal robustness to what they get in the world of economic and social statistics,” he told CBC Radio’s What on Earth.

Every year, Statistics Canada releases a detailed report on the state of greenhouse gas (GHG) emissions. It’s important information about how and why Canada’s climate is changing — and yet by the time Canadians read that important information, it’s already two years old.

The same is true for Environment and Climate Change Canada’s National inventory report: greenhouse gas sources and sinks in Canada.

The latest greenhouse gas data released from Statistics Canada can be found here.

Comparatively, Canada’s gross domestic product is measured and reported monthly, quarterly and yearly. It’s considered critical in understanding the health and well-being of the national economy.

Smith recommends that Canada do the same with GHGs. He made the same recommendation a decade ago when he was director of the environment accounts and statistics division at Statistics Canada from 2003 to 2013.

Back then, Smith said, there was an imbalance of resources devoted to the collection of environmental statistics versus economic statistics. While his team comprised fewer than 50 people, other departments had hundreds, and this disparity made it difficult, he said.

Still, Smith remains adamant that making the change now is imperative, and he points to European nations as prime examples of its positive effects.

“Other countries have gone ahead and started measuring GHGs on a quarterly basis,” Smith said. “Now, the European Union has decided to start publishing quarterly GHGs for every EU member state.”

Frans Duijnhouwer, an economist with the Ministry of Economic Affairs and Climate Policy in the Netherlands, noted the positive impact of quarterly reporting on GHGs by Statistics Netherlands.

“It’s more accurate information and more real-time information,” Duijnhouwer said. “And therefore we can inform parliament better than [with] the yearly greenhouse gas emissions. With the quarterly emissions, we can inform them on that on a more regular basis.”

Duijnhouwer said that more frequent reporting of GHGs can also lead to the introduction of new policy measures by governments to reduce emissions.

Ultimately, he said, it’s up to Canada to decide whether to change the way it reports its emissions. But he does believe that more timely reporting provides better insights into how to achieve climate goals.

What On Earth reached out to Statistics Canada, and the government agency revealed that it is currently researching how to make the shift to quarterly reporting of GHGs.

“The agency is taking a look at how we could kind of improve on the timeliness and the frequency of that information,” said Greg Peterson, assistant chief statistician at Statistics Canada.

According to Peterson, a switch to more frequent reporting is in its conceptual stage, with no solid timeline on when it might move forward.

For Smith, continuing with the status quo is problematic.

“What gets measured appears to matter to people,” he said.

“If we measure things less frequently, I think that sends an implicit signal that those things don’t matter as much as the things that we spend a lot of resources measuring.”